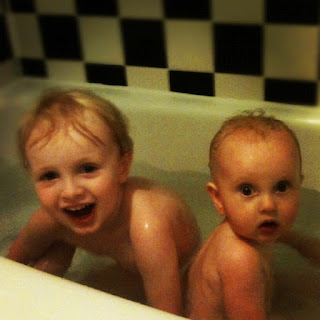 Should I just start putting down newspaper?  We started off strong with the potty training but somewhere along the way things derailed.  I think Liam's just decided he's fine with the pee being on him most of the time.  In his underpants, in his bed, on his booster seat: no problem.  When we started him on undies he'd have an accident and the world would come to an end.  Now he just lets loose and moves over slightly to a dryer spot.

I never thought I'd be this cavalier about my kids' juices.  I remember before becoming a daddy I was having a conversation with a guy once who was holding his daughter and, in mid sentence, cleaned half a cup of snot off her face with the palm of his hand and wiped it on his pants.  I thought "don't gag don't gag don't gag", then I gagged a little.

Now I find these damp spots and immediately dip my fingers in them and smell the tips like some kind of Parisian Nez.

Top notes of Cheerios with a hint of apple juice, nice.

There's just something about his spit, pee, poop, barf, snot, etc. that's not gross to me.  I actually find it less gross than my own.  But that doesn't really explain it since I've never actually poked through my own turd to try and identify it's contents.  I guess its all part of the natural/bizarre parental progression.