I spent the weekend at my dear friend Andrew's bachelor party...

I came home Sunday evening looking forward to undoing the kind of damage that can only be done by eleven guys sharing a house and a three-day bender, but I found things at home had gotten a little "third worldish".  Evidently our drains are backed up.

It's Tuesday now and we haven't made a contribution to the local sewer since Saturday.  No dishwater, no laundry, no showers, and obviously no flushing.  You can go ahead and google something else now.

Still there?  Awesome, I'll try not to use any adjectives like "brown" or "pulpy"

This isn't a brand new problem.  There have been signs leading up to this including a visit from Roto-Rooter two months ago that actually made things worse.  Then this past Saturday the garage flooded after Erin washed some dishes, so she put all visitors on alert.  Everyone got the memo.  Unfortunately one unnamed absent-minded visitor forgot for a few minutes and suddenly things went from bad to extra "third worldish".  Cholera outbreak style.

Life doesn't stop for these kinds of things so Monday morning I went to my first day volunteering at Liam's new preschool.

I can't wait to go back.  It was only two and a half hours but that's plenty of time to work up a good sweat.  Not to mention cover one's self with finger paint, jam, and snot from screaming children who can't sit still during circle.

After preschool I had two hours to feed the boys a dirty lunch, put their filthy bodies into their filthy beds, and get to the dentist to get the crown I had scheduled for that day.  Let me tell you, nothing kicks the stink up to the next level quicker than the kind of nervous sweat that comes from having a tooth ground into oblivion.

I came home smelling like poo on an onion.  The boys weren't much better.  Neither were our clothes, the kitchen, and really every surface of the house.  My father-in-law was in the bathroom heroically trying to solve our problem, while dry heaving.  This involved cutting our spoiled toilet out of the bathroom floor since it was our only access to the main drain and the previous owners had cemented it in.  They were pranksters those previous owners.  His efforts were unsuccessful so we faced another night of filth and binding food.  I couldn't do it though.  I managed to wash myself with a quart of water and I drank my dinner (sidenote: A spouse of mine, who asked to go unnamed, had a high fiber cereal and ended up going in a plastic bag at 5am.  That was a low point.  But what a champ, eh?)

This morning I put in the call to get a pro on the job.  They'll be here any minute.  I'll finish this post later, hopefully with good news.

By the way the only reason I'm home today is because my parents went on vacation and they usually watch the boys Tuesday.  We tried to find someone else to watch them today but our usual backups were busy and we couldn't find anyone new in time.  This is just as well since I hate starting any professional relationship with a call to CPS.

UPDATE:  The guy found our "cleanout" buried in the side yard which was good news.  He was in and out in under an hour.  As soon as he left I stripped Liam of his filthy rags and he shouted "NAKED...can we take a shower?".  It broke my heart tell him, "I'm gonna need ten minutes alone, buddy.  Then HELL YES!!" 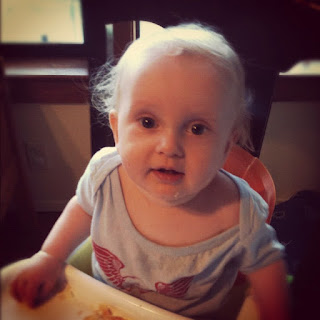 Here's Finn covered in three days of filth and wearing an oversized onesie from Healdsburg Cheese Shop.  Apropos since he smells like cheese.

P.S.  While I was writing this Liam celebrated our success by taking an adult-sized dump in the adult-sized potty.  All by himself!  I rewarded him with another shower.