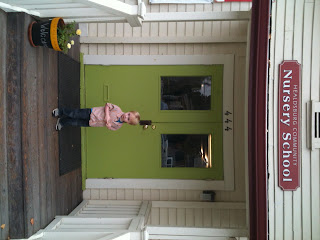 First day of school!!  I dropped Liam off this morning at 9am to his first day at Healdsburg Community Nursery School.  No tears, no tantrums, just off he went headlong into the world of sandboxes and macaroni art.

It really wasn't that big of a deal for me either because of my natural stone-like stoicism and unshakable decorum...

Baaaaahahahahahahahahaha!!!  Yeah right!  Says the guy who needs to breathe into a paper bag every time he watches Finding Neverland.  EVERY TIME!  No, it really wasn't that big of a deal for me because it was only 2.5 hours long and I've had PLENTY of time to mentally prepare.  I think.

All the same I did find myself a little shell-shocked.  I didn't really feel like going home right after dropping Liam off.  I considered just staying in the car since 2.5 hours isn't an unreasonable amount of time to wait, but sitting in a van parked outside of a children's school for that long is bad practice.  Instead I went to Flying Goat Coffee where I swapped knowing looks with some other first-day drop-off parents, had some cappuccino therapy, and held Finn a little too tight.

I picked Liam up at 11:30 after showing up 15 minutes early and waiting in the car looking not creepy (shut up).  He was just as cheerful leaving school as he was being dropped off.  He's a roll-with-the-punches kind of guy I guess.  I asked him how his first day was to which he replied "peanut butter and jelly" which translates to "I had so much fun I didn't eat anything".  Five stars out of five.  I didn't really get the chance to hear anything from the teachers or the other parents but I guess no news on the first day is good news.  Other than some incriminating paint-smears and dirt-boogers it's hard to know exactly what went on but that's okay.  I'll get the full experience next Monday on MY first day of pre-school.  That's right it's a "co-op" so every other Monday, starting next week and on into the foreseeable future, I'll be educating the future of America.  I'm a little nervous about this and shared my concerns with Teacher Julie (who, by the way, is awesome).  She said not to worry about a thing because she'll coach me every step of the way.  Her first bit of advice was "don't help them do anything they can't do themselves".  Like what, hoisting them up to the top of a slide with a tricycle so they can ride it down, piling the whole class into the canoe and running through the playground with them on my back, or seeing if they could swing all the way around?  Why not?!  Either Erin warned her that I can be a bit of a Lennie, or she just read me like a book.  Either way we're all in good hands.
Posted by Unknown