Recently Mike and I found ourselves in a compromising position. Erin and Liam were camping or something*, and my kids were with with their dad. What did this mean, you ask? This meant we were free to go fuck shit up! Since we're kind of old and tired all the time, I did have to beg a little, but finally got Mike to agree to accompany me to see Mortified in Berkeley, where I planned to laugh at the expense of other people's awkwardness for once, as opposed to my own. I thought that he would enjoy this as well. Don't get me wrong, he loves to laugh at my expense, too. Perhaps this was a way for me to take some of the dork-pressure off of myself, if only for an evening.

As is his nature, Mike flaked and then un-flaked on me about 6 times over a span of two days. I was desperately searching for a different date, one that would appreciate the genius of what the evening held in store, but no one was willing to come with me. Finally I used the old tried-and-true passive-aggressive guilt-trip method that my mother taught me so well, and I sent him the following text in reply to him telling me I should take someone else because he was blablablabla...(I'd stopped listening): "I wish I could take someone else since now I have an extra ticket, jerk!" (followed by two crying emoticons). Knowing I'd spent my hard-earned Single Mother money on a ticket for him already did the trick, and at approximately 5:43 Mikey showed up at my house (apartment).

We went through the usual Me: "Okay I'm ready!" Mike: "Ummm, I'm not sure I'm loving that skirt on you..." Me: "Oh. Um, okay, I guess I'll go...change..." Mike: "Oh, yep, that looks much better, now we can go" that all males and females go through when trying to leave for an event of any kind. Am I right? I hope so. I know I'm not very good at things like matching clothes, but I like to think other women have this problem too. Wardrobe disaster averted, and we were on the road, weeeeee!

Anyone who has ever been to Berkeley knows that aside from being dreadfully quirky and full of New Age hoo-ha and Impossible For The Average Human To Afford clothing boutiques, there are also some amaaaazing restaurants there. After sadly determining that we didn't have time for a nostalgic and awesome-incarnate pizza at Zachary's, we went with the natural next-best choice: Rubio's 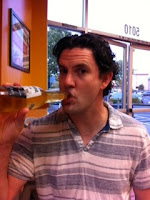 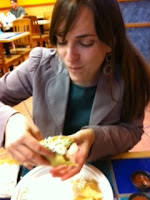 ...where Mike mostly treated me to a Fish Taco Especial combo plate. We ate. We drank. We were Merry.

Next it was on to the Shattuck Down Low for the show. Here we can be seen outside. Or, you can see most of my head, and Mike: 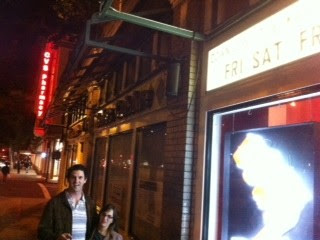 Mortified is a show in which people read from the diaries and journals they kept in their angsty, awkward youth. I really want to do this some day - I have a LOT of material, especially from my Poetry Phase. I could even just use one of my current journals. I have my "Divorce Diary" and my "Dating Diary" and my...blog. During the show, Mike decided to stand really far away from me. Not sure why. But I was very concerned about whether he was enjoying himself and kept looking over to where he stood to make sure he was laughing at the appropriate times. He pretty much did. I now cannot tell you how the show itself was, though.

Afterward we decided that we should head back to Sonoma County, as it was getting late...I had to work the next day...he had to clean his house...the usual excuses people use when they've realized too late that they don't, in fact, like hanging out with each other and are ready to call it a night.

I joke! Of course we went to The Toad in the Hole for beers! While there we discovered this 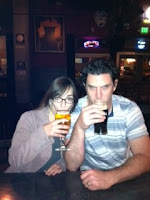 sweet little duo called The Paper Dolls, made up of cute ukelele-playing blond gals with gorgeous smiles and sparkly headbands. Mike insisted I take many, many photos of them, which I suppose you'll see when he recounts our night out on the town. We decided that when we're totally famous we'll have them play at our We're Totally Famous party. Because that happens, right? One beer at a time, people, one beer at a time.

(While Mike looks evil in this photo, he's really not. Sure, he left me at an entirely different bar later that night, but I made it home just fine. Don't worry)

*let it be known to all of my young, unmarried male readers that in general, if your very-pregnant wife and toddler son are away camping, you should probably be camping too. Mike forgets the rules sometimes.
Posted by Amanda Janik