I don't want to go on a rant about some parents and their "who shit in my pants?!" philosophy of child rearing, but the next one to complain that they "can't do anything" about their type II diabetic kid that plays World of Warcraft 16 hours a day is gonna get a big fat earful of uncomfortable silence from me.  Oh yeah.  I don't pull punches. 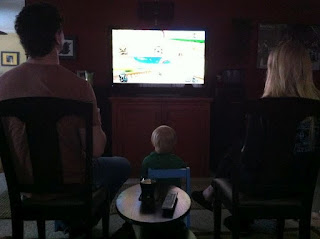 That being said, I generally LOVE modern technology and the stuff that's out there for kids.  Sure they're supposed to run around outside, ride bikes, throw balls, climb trees, I KNOW!  I did all those things as a kid and my kids will too.  But on those rainy Sundays I'm glad that they can throw bananas and turtle shells at go-karts with a kid in China instead of being stuck in a basement playing Dungeons & Dragons.

Growing up I had a friend with an Atari 2600 who was allowed one hour of scheduled video game time daily with friends.  Obviously by today's standards it was a sad little device but back then it was amazing.  Now there are SO many cool things these days for kids!  Clearly there are a lot of smart people out there who care about children and want them to have fun.


But there are some things the smart people are doing today that make me want to slap them in their stupid smart faces.  The cool technology for the kids is great but some of the "future" technology they're developing for my kids is fucked.  For example I read in the news that Nevada has given the go ahead to allow self-driving cars on the road.  Brilliant.  Really?  What happens when they don't work the way they're supposed to?  I had an 89' Honda Civic that I used to drive during college and the wheel fell off.  Not the just the rubber tire, the whole fucking thing. KERCHUNK!!!  I was just pulling into a gas-station "hey, I think I'll get some gas...oh, I guess I won't."  How did this happen?  Simple, it happened because I'm a MORON with cars.  But the problem is there are millions of morons-with-cars driving around out there.  Is someone going to go "oops, I left the car's windows open when it rained last night and now when I hit 70 mph it makes a hard left.  My bad."  Also, in the news, scientist are fucking around with bird flu.  Yeah, the flu.  How many zombie movies came out last year?  Only a hundred?  Do these guys not have Netflix?  Maybe fiction isn't their thing.  Okay, well why not go out a pick up this little gem of non-fiction, The Great Influenza: The Story of the Deadliest Pandemic in History.  Killed more people in 24 months than AIDS killed in 24 years?  Well, YA-HOO!!!

I believe the children are our future (too soon?)  Sure, get them outside running, jumping, climbing trees, but let them play their cool shoot em' up games too...in moderation.  They're going to need both the cardio and the weapon handling skills what with all the zombies in robot cars.
Posted by Unknown