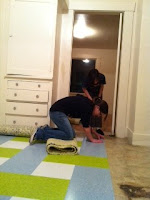 Lately my kid-free evenings after work have been spent wielding nail guns and getting my converse stuck in tile glue and then tracking it around my boyfriend's new house. By 'new' I mean the house he will be renting as opposed to the house he is renting.

I'm quickly learning that Paulie is one of those handy people that fixes things and makes them prettier, even in rentals. Not just little stuff like laying down shelf paper and putting a potted plant on the front porch, but impressive things like painting the insides of the cupboards and drawers, and laying down new linoleum. I've always been a "meh, it's just a rental...why bother putting money into it?" kind of a person, so watching and participating in all of the work going into this place was a bit befuddling to me. But also really fun, because I loves me some power tools. 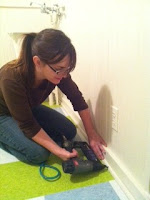 When he first took me over to the new place, I looked and smelled from a simple observer's viewpoint and thought 'Oof, yikes, I'd never move in here,' because I can't walk into a place and immediately have a vision of how great it could be - I just see what it is. As neutral as I tried to keep my face, Paulie could tell that I was hesitant to love his new space, so he explained to me everything he had planned for it: rip up the carpets to expose the hardwood floors below; lay down new flooring in the kitchen; paint the whole place; put in a garden, etc. I told him that he didn't have to convince me, since I wasn't the one that would be living there, and I'm sure it would be lovely when all was said and done.

I kept my mouth shut about everything except for the Jack and Jill bathroom, and even then I only said "oh...hmm...." Okay, maybe I said something more like "oh my god, I hate these kinds of bathrooms!" As if I don't have enough bathroom issues, having a bedroom on either side of me while I'm trying to get past these issues is almost too much. Two doors for someone to walk in on me through? Aaaaaaaaaah!! Also there was no fan, and yes, I like a fan. White noise in a bathroom is my best friend.

Having anticipated my concern, Paulie immediately explained his solution to me. "I have this clock radio that plays different soothing sounds, so I'm going to wire it to the light and rest it on this high shelf up here, so when you walk in and turn on the light switch, rainforest sounds will come on! Waterfalls, tropical bird calls, all that stuff!" I appreciated his troubleshooting on my behalf and found his enthusiasm adorable. I tried but failed to stifle my laughter at the thought of being serenaded by a squawking parrot every time I had to pee. I can't wait for that to happen every time a new guest comes over.

He was right though - his place is looking fantastic. Gone is the smelly carpet, the ugly linoleum, the rat droppings in the drawers. I'm actually really looking forward to spending time there and seeing it come together even more. As long as I get to use more power tools throughout the process.
Posted by Amanda Janik