What a great holiday!  Sure I'm rallying around an event that has absolutely no relevance to me whatsoever, but how is that different from Christmas?  For our household it's all about the food.  Well, that's not entirely true, there's also the booze but not until AFTER NOON (that's just good parenting).  We started off this morning with Huevos Rancheros and chocolate chip cookies.  All dietary concerns are out the window today.  The cookies were Erin's idea and had Liam running around the kitchen going nutburgers with delight.  After eating only the bacon out of his breakfast we gave him his one cookie which he savored with the kind of glazed look on his face that you might see in an opium den.  After he was finished he looked at me with a dark brown smile and outstretched chocolate hands and said, "Daddy! Hug!!"  I usually melt in the face of such cute affection but today I wasn't really planning on showering so I told him, "how about a little later pal?" 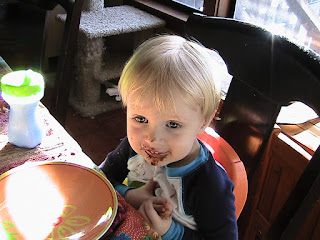 "Can I get a towel or something first?"

The extra syllable meant business and Erin reasoned that I was wearing a brown t-shirt so I went for it.  With two hand prints on my back and a smear from my eye to my ear I told him "I love you pal".  Usually my "I love you"s are met with a look that says "oh that's nice, wanna read me a book or something?", but this time I heard Liam say something I've never heard him say before.  He gave me a very sweet "I yove you".  Sure it was no doubt cookie-induced but I welled up anyway.

Now we're on stage two.  I'm having a beer, all the ingredients for guacamole are prepped, and the 'Texas-style' beef chili with ancho, mole, and cumin is simmering.  I even made up the bed in the guest room since I'll probably be extradited tonight.  I can't wait to see how the game goes!  Is Madge gonna stick with the classics or try and pawn off some new shit that nobody knows the words to?  My money is on the latter.
Posted by Unknown