It's Monday, which means I'm all by myself with the boys.  It's everybody's favorite day of the week here at the Bairdsmith household but today, just to spice things up, I'm going to see if I can look after a toddler and a newborn without turning my head or raising my left arm past my waist.

I should probably back up.

So last night was our weekly trip to Trader Joe's which is always a blast.  We did our usual divide and conquer thing where we each get a cart and a boy.  Erin got the easy one and I got the fun one.  Erin had quite the list last night but when I asked her to tear it in two and give me half I was told "no, it doesn't work that way".  I didn't ask her what she meant by that because I was happy to oblige.  For Liam and I it meant that we got told what four items to get and then we tore around the place with lots of vroooming and screeeching until we got back to Erin for another four items.  Awesome.

After about an hour of this we had two full carts and two boys that stood zero chance of waiting quietly in a grocery store line and therefore had to be set loose.  Now Liam is a boy of many gifts, not least of which is his knack for seeking out and messing with that which he should not.  I kept pace with him, holding Finn in one arm while gently coaxing Liam away from precarious candy displays and infused olive oils, but it wasn't long before he got a hold of the bell.  The exact purpose of the bell is a mystery but from what I can tell when you ring it a grumpy manager shows up and asks all the cashiers the enigmatic question "one bell?", then she gets annoyed at me for having a child who rang a bell that looks exactly like it was put there for him to ring, and then makes a dramatic exit back behind her partition which was awkward because I'm tall and could still see her over it which ruined the effect.  Liam thought this was a great trick but I apologized to the cashiers and promised to herd my kid away from it when really I was thinking, "Who the fuck mounts an awesome bell right at toddler level?  Let me guess, the same person who thought it was a great idea to dress up the wine display in the entry way by tying big shiny balloons to the necks of bottles, also at toddler level?  How about I just give you four bucks so he can break another one?"

It was time to get out of there.  Unfortunately my wife wasn't quite finished so I took the boys out of the frying pan and into the fire by heading out into the busy poorly-lit parking lot.  It was immediately clear I was going to have to scoop both boys up and head straight for safety.  Rather than just grab them both in a fireman's carry though I thought it would be a really good idea to try and perform some sort of impromptu circus act with the boys as I made my way to the car.  Mainly I did this so that all the moms that were looking our way would see me and think to themselves "Oh my, that daddy is literally juggling his two boys!  He must be a really great father and so strong (swoon)".  This is how my brain works.  Luckily we made it to the car before I heard a noise coming from my spine that sounded like flesh tearing while at the same moment someone slashed a flaming sword across my back from my head to my knees.  The only mom that was watching me then was Erin who fortunately has cat-like reflexes and anticipated where my shenanigans were heading. 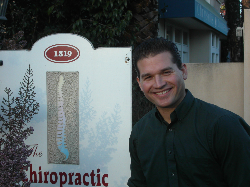 I spent the rest of last night lying on the couch with an ice pack while the boys played hop on pop.  I didn't sleep much and made a point of moaning every time I moved so Erin would know I wasn't sleeping.  Luckily this morning Liam had his 'Roots and Shoots' preschool program so I could drop him off and head on over to my man Dr. Jake.  Dr. Jake is a total bad ass chiropractor.  He welcomes walk-ins, has an office that's pretty close to a High Tech Burrito which is great, and when it comes to paying he's very "don't worry about it, if your insurance doesn't cover it we'll let you know".  When he asked me what happened I told him "I was in the Trader Joe's parking lot holding Finn in my left arm like a football down low around my waist while at the same time, with my other hand up over my head, holding Liam upside down by his leg while kind of swinging him in the air and giving him raspberries on his back".  I don't know why I was including so much detail.  I guess I was hoping he'd say "oh sure the Trader Joe's baby football/upside down toddler raspberry maneuver.  You're our third one today!  Lie down, I know exactly what to do".  He ended up just doing his usual thing where he makes me hug myself and then he sits on top of me.  Now I feel better.  If you want to check him out here's the link but I should warn you he has an identical twin brother in town.  I learned this one night when I saw the brother out at a bar and extended to him the kind of candid familiarity one does with a person who makes you hug yourself while he sits on top of you.  It was kind of awkward but the guy could have been a little more merciful and recognized that he has a celebrity doctor twin brother in town and acknowledged that he had been mistaken for that brother rather than let me go on as long as I did.  I guess it's not easy having a celebrity doctor twin brother. 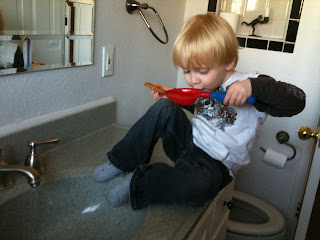 We're back home now and while I do feel quite a bit better, I know there's no chance I can deliver on the kind of Monday these boys are used to.  But so far it's not so bad.  Liam has spent an hour on the bathroom counter drinking from a sand shovel.  It's the kind of thing I'd normally prevent him from doing when I'm physically able but I guess it's good to indulge sometimes.  I think that, since it's my night to cook, later I'll teach them the fine art of  self-medicating and "calling out for pizza".