I think I probably went through my identity crisis a little late in life, which was lucky since I avoided looking like Color Me Badd in high school like all my peers did.  My "exploring the true me" phase came about in college and didn't really manifest itself in the normal ways, which was why I started experimenting with the needle.  Specifically size 10 bamboo.  They just held the worsted weight yarn better.

I was a Junior in college and the local craft store held a knitting class so I signed up.  My frat boy best bud at the time informed me that this was, in fact, "Hella gay dude".  Gay?  What's 'gay' about knitting?!  'Grandma' maybe but why 'gay'?  The implication was that to create fantastic winter wear from scratch was somehow feminine, but this was just another example of the ignorance brought on by subsisting entirely off of a diet of bong water and date rape (fucking frat boys).

Knitting is MANLY.  Who developed it?  Men, that's who!  And not doughy pasty kitten loving men, but FISHERMEN and SHEPHERDS.  Oh yeah!  They were out there with the raw materials and the survival instinct doing what they could to endure the elements so they could provide for their fertile wives and hearty offspring.

Speaking of 'hearty offspring' look how cute Liam is in this fabulous hat. 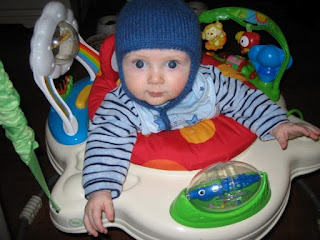 You should see what I can do with cashmere!

So yeah, way macho.  I took the class and shocked the naysayers who thought I'd never make it.  That was back in 1995 and I've been pretty steady with it since.  I can bust out any pattern of scarf imaginable, I can pick up stitches like bitches, and I can turn the fuck out of a heel.

Unfortunately I've been a little too busy these past couple of years to work on any new projects (that picture of Liam is two years old).  With work, school, parenting, and 'PAIR-RANTING' (get it?) I just haven't had much time on my hands.  But now that winter has finally descended upon northern California (sub sixty degree weather AND precipitation for two days straight!!) I've been feeling the itch to make my kids something itchy.  I may have to slow down on the blogging a bit and speed up on the cable knit.