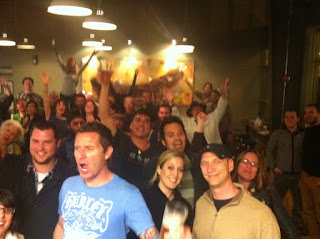 They say you learn something new everyday and it's TRUE.  Why just this week I learned that making homemade refried beans requires the cancellation of all plans 8 hours before and after the 3 hour cooking time, I learned that Finn's absolutely most favorite thing in the world is my acapella rendition of "White Lines", and I learned that if I mounted some kind of switch on my nightstand that would allow me to turn off the kitchen light from bed, I'd save thousands of dollars a year in marriage counseling.  Unfortunately none of this new knowledge came in handy during last night's Pub Trivia at The Wurst.

God knows I think Healdsburg is truly paradise on Earth, but its always had a few things missing.  Mainly a place to eat that is not fine-dining or fast-food, a pub trivia night, and black people.  We can cross two out of three off that list thanks to The Wurst.  The Wurst is a Sausage Grill & Beer Garden that opened up just last year and while I'm not necessarily a huge fan of butt-cancer cuisine, it's clear that the owner Charles Bell went way out of his way to make sure that every single ingredient he uses, down to the pickles, is shockingly delicious.  If you can allow yourself the indulgence, I recommend the "Smash Burger" and a shake.  Even Jeff Cox says so.  I'm getting emotional just thinking about it.

As of last night they added pub trivia to their menu and listen to how cool my wife is.  She insisted we go even though I had to miss class, pay for a sitter, spend the kids' allowance on beer, and still get up this morning at 4 a.m.  I was going to run with the whole "grown up, responsible, good-work-ethic, NOT drinking heavily on a Thursday" thing I've been trying out ever since we had kids, but she knows trivia and beer is my peanut butter and chocolate and could tell I'd have been heartbroken to miss it.

We did NOT win, which is okay.  I'm surprised my strategy of narrowing my eyes at the competition wasn't more effective.  Erin says we would have done a lot better if I'd "listened to her" but I'm not about to start doing that now.  Besides the real issue was that the questions were definitely biased against people who didn't know the correct answers.  Erin had a blast but, with a few audio issues and the fact that the place was so packed people were spilling out the front door, she called it a good "First Pancake".  Tod Brilliant organized the whole thing and did a tip-top job but said he's looking for a new host to take the reins.  I threw my name in that hat of course, but we'll see. I've still got a few more months of school left and 4 a.m. came a little too early this morning.