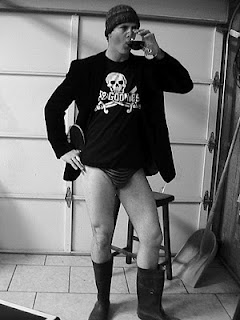 I was spending my Monday off with the boys in my usual fashion, clad in my finest laundry day attire and watching Dr. Who, when my phone rang.  I'd recently lost all my contacts because I'm really smart with phones so the number was a strange one, but since it had a San Francisco area code and I was expecting a call from my sister I answered "well hello my dear!" in my best Ed Wynn voice.  ".........Um......hi?" said a voice that was not my sister's.  It's too bad too, she's the only one who likes my Ed Wynn.

It turns out it a was girl named Amy.  Amy was doing a 'casting' for a Healdsburg based photo shoot that Outside magazine was planning to do and explained that she had gotten my number from my good pal Scott Keneally who apparently still says nice things about me even though I made fun of him here.  "You want ME?!" I beamed.  "Well, I'm just getting a little info and taking some pictures, Outside will decide who they want" is what she said but all I heard was "you are going to be famous".  I immediately started worrying about all the temptation that goes along with travelling the world as a famous model.

This wouldn't be my first foray into high fashion.  In high school I was in a show to promote local mom and pop retailers where I sang 'Give My Regards to Broadway' while wearing a Cosby sweater.  Beyond that though I hadn't had any formal training.  At least nothing like the training received by Amanda Janik at the Bloomfield Hills Barbizon School of Modeling, circa 1991 (I swear to god that's true)

Amy sent me an email to give me an idea what the Outside article was going to look like.  Here's the link.  It was while I was checking out the photos of these rugged, good-looking, outdoorsy types that I realized I had peanut butter on my face, my thumb in my nose, and about a half a cup of spit-up seeping through my "Ghostbusters" t-shirt.

I was so excited!  I immediately sent an email back letting her know I was "definitely interested".  As soon as I hit 'send' I realized that we both had gmail accounts which meant that I could check out her Google+ page and see what she looks like so I could recognize her when we met.  Then I realized that she probably checked out my page too to see what I looked like.  I hadn't checked my Google+ page since I'd created it (who has?) so I thought I'd better take a look at what picture I'd posted, hoping that it was one of me looking exceptionally rugged and outdoorsy. 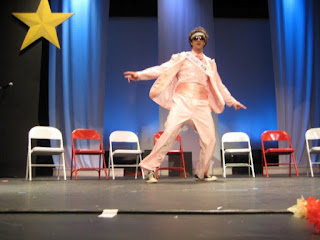 Incredibly Amy still emailed me back and we met two days later at Spoonbar.  She was really sweet and handed me a form asking for some of my basic information including my measurements.  I made sure to subtract the three pounds from my weight that I was planning to lose the week before the shoot and I took extra care in drawing the "8" in "6 foot 8 inches" so they could be sure they weren't reading it wrong.  After that she stood in front of me and snapped a few pictures while I stood against a wall and re-defined the word "awkward".

This was perfect because it meant that my very first and only photo shoot would live on indefinitely, not because the pictures would ever be published obviously, but rather because the people at Outside would likely retain them for training purposes.  Or maybe I'd even become part of the common parlance in the fashion magazine world when describing other models, as in "well sure the model looks fantastic but how would you describe his comfort level in front of the camera on a scale from Mike Bairdsmith to Gisele Bundchen?"

Afterward I told her I was curious who else she was meeting and she listed off about half a dozen names or so, all of whom I knew, all of them rugged, really good-looking, and outdoorsy.  So yeah, I won't be hearing back, but that's fine.  My career as an international model had already gone farther than I ever dreamed it could.  Probably farther than it should have.  It's just as well too, my boys have enough of a legacy to live up to already and they don't need their daddy gallivanting around the globe.  One must always think of the children.

UPDATE:  The Outside Magazine article came out.  Here's the link if you want to see me not in it.
Posted by Unknown