Along with my application for "Father of the Year" I'm going to submit this photo of my two boys at 6:00 a.m. St. Paddy's Day morning just minutes before their daddy packed them up in the car and headed out to a bar... 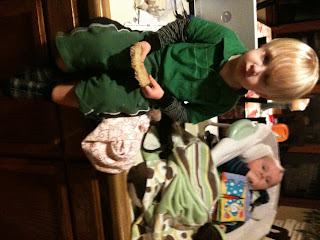 Liam doesn't say much but with a look like that he really doesn't have to.  I should have tucked them both right back in bed but I didn't.  Instead I hauled them down to the annual Healdsburg St. Paddy's Day Parade put on by our local pub, The B&B Lounge.

I have to confess, an event like this parade is my cup of whiskey-spiked tea.  It's just the right balance of Mayberry meets Mardi Gras.  It's very cute and very small town, while at the same time kind of wrong in a good way.  My excitement coupled with a few warming shots of Jameson had me too filled with bravado to appreciate that Liam wasn't really digging the scene.  Finn was okay, having fallen asleep on the drive over, but Liam had the misfortune of being stuck with a daddy whose train of thought was "What two-year-old wouldn't want to ride around town on his daddy's shoulders this freezing March morning surrounded by 400 drunk and screaming strangers?!"  By the end of it poor little Liam had a death-grip on my ear and a look on his face of abject misery.

I held him as tight as I could and we headed straight home.  I felt like an asshole, but there's a lesson in this, albeit one I really should have learned by now...

There were other kids at the parade sure, but the ones Liam's age were tucked safely away in decorated strollers (duh!) and the older kids were all dressed-up in green costumes they'd made themselves with the help of their "good" parents.  Oh well, it's not too late to make it up to him.  Thankfully Easter is only three weeks away.
Posted by Unknown