As you can guess from the title, I've been kind of a cranky bitch lately. I'm not sure why either, which makes me even grumpier. I'm not PMSing, I'm not sleep-deprived. I've been working for seven days straight which you would think might be the cause, but actually I'm saving money on payroll, and it's been so damn slow that even after I vacuum and price rompers and organize socks, I still have time to sit down with a cup of tea and read my book. Or, write blog posts.

Mike has been bearing the brunt of my whining like a champ. As always, he's very sensitive to my moods and does what he can to make me feel better when I'm being snarky and taking all of my complaints out on him. 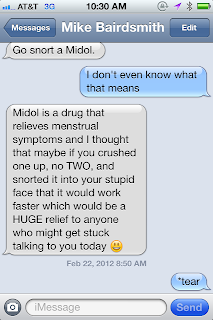 In this case he should have been more sensitive, since it was his fault that I was in a bad mood. He signed us up for this 40 Days of Writing project and committed us to posting on our blog Every Day for 40 Days. What the frack?! I may have gotten slightly annoyed at him, which always makes him act like a defensive schoolgirl with bruised feelings. So then of course, since I somehow always end up being the guy in every opposite-sex relationship I have, I had to apologize and grant his wishes to get him to stop crying like a stupid baby. 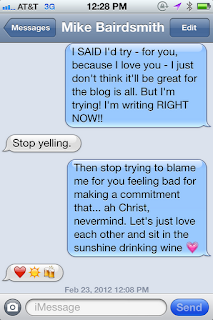 So then we were committed to this challenge. I got kind of into it and started brainstorming ideas to write about. Of course I then had to take control of the situation and make sure ADD Mike followed through on the whole process. The process that was his idea in the first place.

Since the point of the project is to write every day but he and I are alternating posting here every day, on my days off I've been working on my own website, which is sort of like my kind of homely-looking, intentionally neglected step-child. I don't spend too much time crafting what I post there, and I haven't told anyone about it because I don't like the way it looks yet.

The other night my friend Andrea helped me streamline the site a bit, and added a picture to the home page of me putting on lipstick. She and I found this appropriate and funny, the irony being that I almost never wear lipstick or pay too much attention to what I look like, period. As the site is still a work in progress, I wanted some feedback (read: positive feedback). My boyfriend said "the pic is captivating and somehow also awkward." I thought this was GREAT, because I am awkward, and that was the whole point! 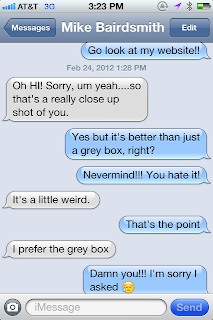 It turns out Paulie actually agreed with Mike, but fortunately we're still at that stage in our relationship where he's careful not to offend me too much. I mean, he'll make jokes about how my ass looks huge in a picture on facebook, but he needed to wait for Mike to fuck up first before he told me that in fact he thought the lipstick picture was cliche and no one would get that I was poking fun at myself because they don't know me. Dammit!

Back to the drawing board. Back to being a bitch. Good thing I've got about 31 more days to perfect all of the above.
Posted by Amanda Janik