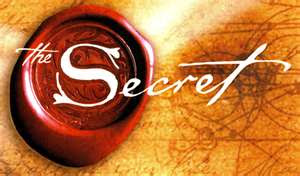 Here's something you may not know about me: I have six brothers. Yep, six. Don't ask me to explain how they all came about or relate to me specifically in terms of mutual DNA or anything. Just know that there are six.

Because of this, I grew up feeling more comfortable around men than a lot of women I know, and being "that friend." You know, the girl that men let into their inner-sanctum because she's basically "one of the guys." You can talk about pooping, relationship troubles (from a man's perspective - always fascinating), and which stranger walking down the street you would bang, otherwise known as the Yes, No, Maybe game. I can hang with all of that, no problem.

In exchange for listening to all of the amusingly crass and self-important things men like to shoot the shit about, I get access to quite a bit of important, top-secret information.

The other day I was whining via IM to my youngest brother Ben about why all the men I date "fall in loooooove with me," when all I really want is to...well, just date. Casually. The last thing I need right now is...well, a serious relationship.

So Ben, being the all-trusting and cool young man that he is, shared with me one small but important aspect of how men view women, and what they expect and/or settle for when seeking out a partner. Or even just a mate.

This was our conversation:

Me - I'm starting to realize the difficulties of being the perfect woman, now that I'm not fat anymore.

Me - Dudes be fallin' in love with me left and right!
- what the hell?

- what ever happened to just casual hanging out with some smooching now and then for fun?


Ben - I think once you're in your 30's and single it gets a lot more desperate.
- not that you're there, but the men sure are.
- you've seen 30 Rock, you know how Lemon is desperate.

Ben - well Amanda, girls are crazy, smart, or hot. Its a commonly known rule that all are two of the three. If you're all three, then you better be prepared for everyone wanting to put you in their trunk and taking you home.
- wait, that's not quite right. But you get the idea.
- sane should be the word, not crazy.
- you get sane and smart, but ugly. Or sane and hot, but dumb.

Me - wait, all girls are either sane, smart, or hot? And two out of three is normal? But all three is worth going nutburgers over?
- is that right?

Ben - yep.
- oh god, I shouldn't have let the secret out
- when I said commonly known, I meant among men.

Needless to say, I had to consult with Mike about all of this, and within 6 seconds of me asking if this was accurate information, he sent me this handy chart: 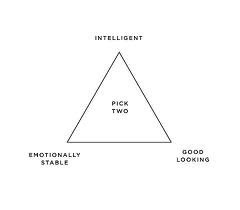 A couple of days later I was picking my son up from a play date, and ended up staying for dinner. While eating barbecued chicken and wedges of grilled zucchini with my fingers (like the polite guest that I am), I decided to bring up the topic to the Husband of My Friend, who wishes to remain unnamed and has threatened to "boycott" my blog if I keep referencing him (which I've only done once before, jeez!). Try it buddy! HERE YOU ARE AGAIN!!

Unfortunately, all I remember from our conversation is that I am not, in fact, the perfect woman, and in the categories listed above I get a 75% for hotness, 75% for intelligence, and 75% for sanity. But he gave me 100% for funny, and I was just as happy with that. When asking what the difference between 75% and 100% was in the grand scheme of woman-scoring was, I was told that 75% is only enough for a man to move his eyes when a woman walks by, whereas 100% is worthy of a head turn. And I have to say, he's right. I don't turn many heads. This was a comfort to me, given the initial dilemma that prompted this entire discovery.

Once I got to a point in our conversation at which I knew I'd start forgetting important factors, I started taking notes. The last thing I wrote was this:

My friend, wife of Husband of my Friend, advised that I just start acting crazier. So, I'm working on that, and expect to hear crickets chirping on my next night off from my kids, aka "date night." I could use the break, I have so much laundry to do! As for advice for the rest of you single women in your 30's - if you do happen to be one of the Unicorns that accomplishes the holy trinity, please, just don't go smelling any napkins.
Posted by Amanda Janik

Email ThisBlogThis!Share to TwitterShare to FacebookShare to Pinterest
Labels: dating