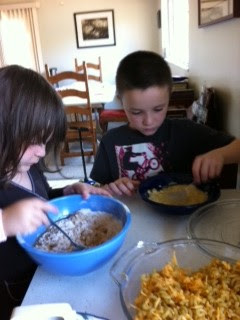 My kids love to cook, and I love to make them work for their meals. It's a win-win all around. The only problem that I've run into is the fact that I can't actually cook.

When I was young, we didn't really have a routine, for ANY meal. It was each boy or girl for him or herself, so I ate a lot of cereal for breakfast, lunchables or more cereal for lunch, crackers or nachos for dinner. I tended to wander into the kitchen when I felt hungry and stare into the cupboards in very much the same fashion that I stare into my cupboards as an adult. Kind of hanging on the door, blank look in my eyes, not really seeing the cans of corn and black beans, the rice pasta and granola, the quinoa and sardines. Sure, the contents are different than those in my childhood (creamed corn, Ritz crackers, huge cloudy-clear plastic bags of welfare mystery puff cereal), but the lack of ability is the same.

I did, however, bring from my childhood two very important recipes for standard Midwestern fare. One was for Tuna Noodle Casserole, something I haven't made since I was 18, (but after telling my kids about it, it has now been requested, and so I must pull it out of the memory archives. Ha! Those suckers don't know what they're in for). The other recipe was for Macaroni n' Cheese.

When I tell people that I make a mean Mac n' Cheese, they always ask how its done. They start asking about bread crumbs and flour and multiple cheeses and mustard - mustard! What?! I quickly clam up in these cases because I assume that my recipe must be too Redneck/White Trash (yes, that is where my mind automatically goes, and with good reason), and I should under no circumstances share how the magic happens.

So, the other night when Evie requested Mac n' Cheese with a little over 2 hours until dinner, I took it as a challenge to prepare it in time - and a sign that I happened to have ALL FOUR of the ingredients available. I gave the kids each a task and we set to work. Luckily Evie can be trusted with knives and other sharp objects - she was my designated shredder, and there's a whole lotta cheese in this bitch:

Step 1. Melt a bunch of butter in a casserole dish
Step 2. Sprinkle in some salt & pepper, or if you want it to taste a lot better, use Savor (which is the secret ingredient in everything I cook. Everything.)
Step 3. Pour a bunch of dry (yes, dry) elbow macaroni in there and mix it all up
Step 4. Dump about 2 pounds of shredded cheddar cheese in, mix well
Step 5. Cover the whole thing with enough milk to just cover the noodles, so that you have to pat some down
Step 6. Cover, bake at around 325 or so? For like 2 hours? You'll figure it out. 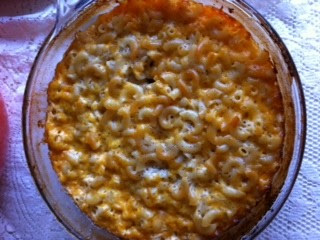 Looking better than this would not be a bad thing, either.


We also decided to bake banana bread, so I had Evie mix the ingredients. To make up for half of them being flung onto the countertops and floor, I had Jonah mash an actual banana to put in. I know! I felt like Paula Deen. 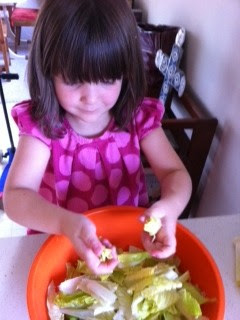 Lately I've been eating fairly healthy dinners. I don't know, it just kind of happened. As a result, while rubbing butter into every crevice of the banana bread pan, I was suddenly struck with a strange thought: "we should make a salad to go with our carbs and butter." Weird. Stranger still - I had ingredients for salad. I was completely befuddled by this fact - even though I can't yet afford a personal shopper and so therefore do my own grocery shopping. I decided to take it as another sign. Maybe a sign that I don't want my kids to have heart attacks? We made the salad.

Jonah disappeared during this activity, but Evie was thrilled to practice her lettuce-ripping skills - after a wardrobe change, of course. I'm wondering now if I should be concerned with how deftly she tears into produce and wields knives and shredders....

Not quite on time but close enough, we sat down for another experience I rarely had as a kid but is the norm for us now - a family dinner. We feasted like Midwestern Royalty on a well-balanced meal (by my definition - don't judge) and told stories from our childhoods. We each gained about 12 pounds. We were happy.
Posted by Amanda Janik