I am The Beast

Dating has made me realize that I am not very much of a lady. Aside from the fact that bodily functions make me giggle - a lot - I have a few other faults that I'm working on.

I hate shaving my legs. And underarms. And feet. I guess that guys like smooth surfaces, so I've been forced to shave a lot lately, especially since its summer (men don't expect you to shave in the winter months, right?! I'm counting on this...). If I get comfortable enough with a man that he might have an opportunity to touch my legs, well, that's it. I usually forget until its too late that I am of Eastern European descent and even if I shaved my legs that morning, they will be the consistency of sandpaper by the time afternoon rolls around. The couple of times I've had my limbs slung over the lap of someone while watching a movie, or whatever, a hand immediately goes to my shin - and then immediately lifts off of it. There is some hesitation, presumably while he decides how to react to the pain that was just inflicted to the baby-bottom-soft palm of his hand. If he's a gentleman, he'll suck it up and put his hand back. If he's not, he'll casually tuck some hair behind his ear or adjust his glasses, then rest his hand awkwardly somewhere near my leg. 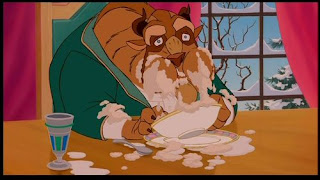 I eat like The Beast. I can actually eat politely, don't get me wrong. But recently I was taken out for burritos and, coming from a town that has one burrito establishment called The Big Burrito, and another called Burritos as Big as Your Head, I love me some tortilla-wrapped mess. On this occasion, however, when I picked mine up whole to shove it into my face, I looked across the table to see that my date had kept his on his plate, and was eating it with a knife and fork. I very slowly set mine back down, trying not to draw attention to myself, and picked up my utensils. I looked at them awkwardly, much like The Beast does when contemplating his spoon after first slopping gruel all over himself, before looking at Belle and realizing that he wasn't using proper table manners. Unfortunately my date didn't take the route Belle did (by adapting to The Beast's shortcomings and also drinking her gruel out of her bowl). So I ate that thing with a knife and fork, too. I used a lot fewer napkins than I normally do - therefore, using utensils saves the earth. I'm into that.

I wear Grandma Chonies. I can't really afford to be going out spending money on things like new underwear. Also, I absolutely hate shopping - in the intimates department or elsewhere. I generally go straight to the sale table and dig around in whatever is left there, which is basically what no one else wanted. They're ugly, garishly-patterned and oddly-cut. I haven't even done this in quite a while, though, so I'm just left with whatever my crazy menstruation hasn't completely ruined each month. Most of my undies at this point are much too big. They're also terribly pilled, stretched and faded - but they're comfy as all get-out! Should I care that they aren't lacy and tiny and silky and...well, sexy? Maybe. But if someone gets up in that business, he'll already be so distracted by trying to act cool about my hairy legs that he won't notice, anyway.

I strongly dislike exercise. There's not really much else to say about this. I'm terribly unfit and, while I realize this will be pretty bad for me at some point, I simply cannot wrap my head around the idea of exercising. It hurts! It sucks! Its hard to breathe! And it just makes me want a beer afterward, which kind of defeats the purpose a little bit, methinks.

To summarize, I need to find a man who likes hairy-bodied food-shoving saggy-chonied out-of-shape women, and then I need to snag him. With my charming personality...
Posted by Amanda Janik

Email ThisBlogThis!Share to TwitterShare to FacebookShare to Pinterest
Labels: dating