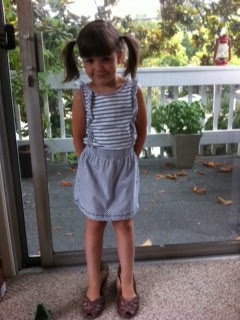 As is the case with most parents, at least one of your children will always, without fail, be your complete opposite. This is a fun and fascinating thing to witness as it develops and becomes achingly clear. It is also difficult to manage - having no experience whatsoever with whatever it is they are passionate about, and you are not.

It should be noted that she also loves clothes, and goes through no less than 6 wardrobe changes per day. But at least her outfits are kind of crazy and rarely match or bear any hint of future fashion sense. This is a relief because, frankly, I'm really bad at matching, I often look crazy, and I have no fashion sense.

But the shoes. The shoes!!

Evie has about 45 pairs of shoes, which she loves to change as often as her clothes. Sometimes she wears two different shoes at once, and though I go through the motions of trying to make her change one of them, really, who am I to judge? Also, I kind of don't care if she wants to search for Carlo the Monkey at Trader Joe's wearing one brown Saltwater Sandal and one silver See Kai Run.

The problem I run in to is when she wants to wear my shoes. This shouldn't be a big deal, really. 98% of my shoes are what you might call "sensible." They're flat, usually European, rather clunky and, well, comfortable. When I try to wear heels I look like an osteoporosis-riddled elder awkwardly trying to stumble from my station wagon to the early-bird happy hour at Applebee's. Lets just say it's not pretty. The embarrassing thing is that I really should be good at walking in heels. I mean, I graduated from Barbizon, after all! It's safe to say I've let them down.

Evie will risk life and limb climbing and balancing on stools, chairs and her older brother in an attempt to reach the shoes at the very top of the shoe thingy that hangs on the back of my bedroom door. Because that is where the heels are. Why I keep the most dangerous shoewear at the highest level, thus increasing the chances of being impaled by a pointy heel if I ever decide to slam my door for some sort of emphasis, I don't know.

Once she has the desired shoes, she will put them on and scuff around the apartment, snagging the carpet, tripping repeatedly and declaring "look at me everyONE! I'm a lady! A Lay-DAAAY!" Nothing deters her. She loves it and honestly, so do I. So long as she never develops a shoe-shopping addiction and goes out spending thousands of dollars on shoe brands that I can't even pronounce and she'll deem unworthy once a new season hits. I simply cannot accept that behavior in my own child.

Luckily she hasn't shown much discrimination in her love for adult shoes. While preferring the pretty, pointy, dangerous kind, if given the opportunity she will just as happily slip into a pair of gigantic crocs, as shown here after a friend with gigantic crocs stopped by to visit. 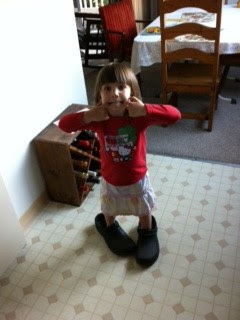 This fact is a great relief to me. Those shoes look really practical and comfy. Proof that there's at least a little bit of me in her. Just a little, but that's enough.