Everyone is sharing a bed with their kids and I don't get it.  This is standard practice among almost every young parent I know.  Okay, you have a newborn, you're nervous that something god forbid could happen to them while they sleep so you want to keep them nearby.  I totally get that.  Erin and I kept Liam in a basket in bed with us for a few days after he was born but the first night that we put him in his crib we found that we slept better and so did he.  We got the whole monitor thing to ease our 'what if?' paranoia and that was it, bam, done.  Since then he has spent pretty much every night of his life in that crib and we all sleep great.  Really really great.  Like 12 hours a night great.  I know I'll sound naive (and like kind of a prick) for saying this but I think those parents who tell you they haven't slept more than 4 hours a night in 6 years, those are the bed-sharing-parents.  Anysmug, this week Liam's crib days ended.  Erin is full-term and that beautiful belly is starting to make the house feel smaller so the nesting projects have been kicked into high gear.  Hence Super Important Project Number One aka The Completion of Liam's New Big Boy Bedroom was completed.  I was dreading this day of course.  The nights of giving him a water, a night diaper, a pacifier, and 'boy'* and watching him fall asleep in seconds were over obviously.  I didn't even know where to begin with this new bed thing.  We pulled out all the stops and got him a top quality mattress, good pillows, and super awesome dinosaur sheets with matching quilt, shams, and bedskirt (cuz toddlers need that...shut up).  His first night in the new room was last Sunday night and I "volunteered" to be the first to attend to his needs during this rite of passage.  I put him in the bed and said "night night?"  He said, in not so many words, "Dad, you are hilarious, truly".  So began a long night of experimentation.  I was reminded of Eddie Izzard's bit about Dr. Heimlich and what it must have been like for him during the developmental stages of his 'maneuver' (kick to the crotch, frying pan to the head, etc.)  I first tried the ubiquitous and incomprehensible bed-sharing.  Why not?  It turns out it was a good place to start because things could only improve from there.  After that I tried a few techniques:

I read him a story. 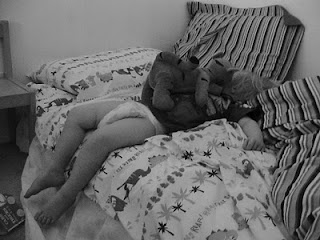 How about I rub your back?

"While I jump up and down?  Good luck with that."

I know I'll move your nightlight to a different spot?

"Now you're not even trying"

What if I just leave?

"What if I just scream?"

I decided I'd try sleeping in the 'guest bed' which we kept in the room.  This gave Liam more room to run around freely, switching the lights on and off, opening and shutting the closet door, and eventually checking to see if I was really sleeping by clobbering me in the face with his sippy cup.

At this point I switched gears.

I dragged a chair into the room and put him in bed.  He got up so I put him back.  He got up again, I put him back again.  Just as I was starting to feel like Sisyphus (about three hours in) something remarkable happened.  He started to sort of 'get it'.  He stayed in bed for a bit and got up eventually but the next time I put him down he gave me an "Ooooh....'night night?'...well okay" kind of look and he just stayed in bed.  That was pretty much it.  Over the course of the week I honed my technique.  No laying next to him (duh), no reading because he thinks it's for him, and less and less time in the chair.  By last night we were dialed.  I gave him his accessories, a big smooch, said 'night night', and didn't hear a peep until this morning.  I guess we're done.  That wasn't so bad!  In a mere six nights of sticking to it and not giving up and now it's just like it was in the crib....maybe even better!

So maybe I'm lucky or maybe Liam is one of those "easy kids" but I swear I think we parents can take a little more responsibility for the choices we make with our kids and stop blaming them for keeping us up and ruining our sex lives.  As a wise man once said, "they're kids, if you let them do whatever they want they'll just sit around all day watching T.V. and diddling themselves."  Too true.

* 'Boy' is actually a girl figurine dressed as a polo player.  Liam must have 'boy' at all times.  You can sort of see her in the picture on his left shoulder.