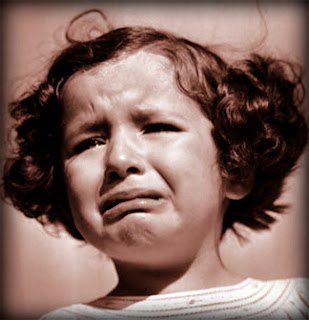 Thought to be exclusive among babies and young toddlers, The Silent Cry is widely known among parents as a general precursor to a much bigger, louder, ear-splitting cry. The goal of the parent is to rush to their child and inflict extreme and distracting comfort before the Real Cry begins, because when it does, its a doozy.

Since starting preschool last year, Evie has proven that she has not at all forgotten the affect of the silent cry from her baby years. It seems she's just been saving it for those first few precious days of school. I'd forgotten about it until facebook started doing their "on this day, in 2010" thing, which told me last week that I'd made some status update about releasing a silent-crying Evie into the very capable hands of her hippie teacher. "Ha!" I thought, "I forgot she used to do that!" God I'm an idiot. Hello! Famous last words, Amanda! Remember?

This week has been an exciting one, what with Bapa visiting and all. As a result, not quite enough sleep has been happening, which sets all of our moods into hyper-sensitive Don't Look At Me Like That Or I'll Fucking Cry Like You've Never Seen Me Cry mode. This morning Evie was complaining about the fact that I hadn't mixed her granola into her yogurt. Yes, she HAD specifically asked me not to mix it, but now I hadn't, and she was pissed. So, I mixed it. While she started to complain that I'd done it incorrectly, Jonah asked me, exasperated, why I hadn't put some thing that he thought should go in some place into that specific place. Without making too much effort to speak under my breath I said to myself "jesus, everybody's a critic today, huh?" to which Jonah replied with a "Mo-om!! Not meeeee! Uh!" followed quickly by an amazingly red face, and tears. Oh, the tears! "Why are you so MEAN?!" he wanted to know. I told him he needed to get a grip, or go to his room, as I was about to completely lose my shit if one more kid made any noises of complaint when all I wanted out of life at that moment was to get them their breakfasts.

Several minutes later, happy again, Evie and I took Jonah to school. This is a very pleasant part of my day. At 8, Jonah still holds my hand while we walk, and this morning he hugged my arm, sighing contentedly and saying "mom, you're just...you're just the best mom ever! I just...I just love you so much!" Yes, this is the same child that had accused me of being a terrible mother within the last half-hour. Such is the unconditional love of children, and I absolutely love them for it.

Next came school drop-off for Evie, which these last few days has been a different story. Remember the whole "she used to" thing from above? Right. This is where it comes in again. Evie attends a lovely, gentle Montessori preschool, with a great play area and lush garden, which is where parents drop off their young for their day filled with whatever wonderful stuff they do there. 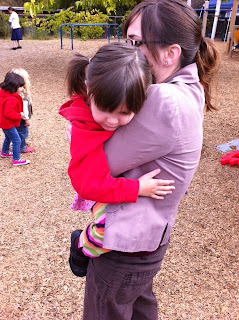 Evie and I have a routine of three hugs, three kisses and then its goodbye time. Unless, of course, she's decided to start The Silent Cry - mouth gaping, breath taken in and held, face reddening - all of this as I try to pry her steel grip from around my neck and legs. Usually it doesn't take too long for her teacher to calmly jaunt over and peel the top half of Evie off of my torso, while I then work to unhook her ankles from around my thigh, stumbling and dropping the contents of my purse into a pile of damp wood chips along the way. Surely this is a comical scene to witness - I don't really know, since no one else has ever done it in my presence. So yes, I'm sure its just my kid.


This morning her grey-ponytailed teacher got her attention by saying "Evie! What are you wearing?" Ask her about her outfit, the tears stop. "Its a poncho" she said. "A poncho!" he exclaimed, as if it was the moon slung around her shoulders. She smiled, just a tiny bit. "I used to have a poncho!" And that was that. I crouched down and began scooping zinc lozenges and tampons and wood chips into my purse while I backed away slowly. I didn't avert my eyes from the scene until I'd reached the main building, which, as it turns out wasn't necessary. Evie never even noticed I was gone, so happy was she hearing about her teacher's 70's poncho. Right before I closed the door behind me, I saw her laugh and run off toward the chickens. Bliss was restored. Until tomorrow morning, when we do it all over again.